So… it’s been a while since I’ve blogged about anything! Let’s just say that between starting my own business, Blythe Styles, buying a new house, selling our old one, moving, and spending a month in Europe, I’ve had a fairly busy 2014! But now that things are settling down, it’s time I report on some of our projects from this year! First up are some thoughts on our popcorn ceiling removal.

The house we bought this year had popcorn ceilings. If you don’t know what this is, you are lucky! But assuming you know what popcorn ceilings are, you will be glad to know that we had them removed! Here are before/during/after pictures of our entry way: 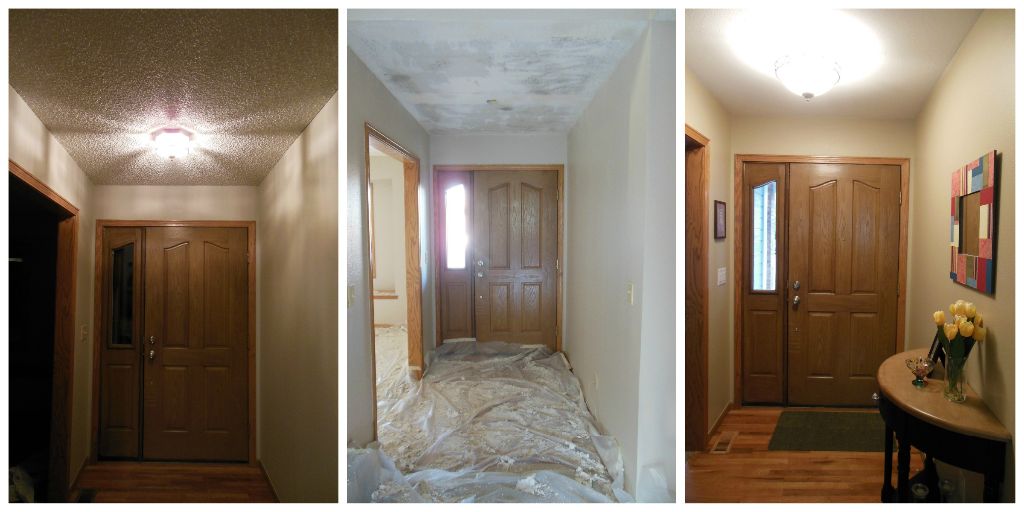 Before: In the picture on the left, you can see the crazy amount of popcorn texture that the ceilings in the house originally had. I was so anxious to get rid of them!

During: In the center picture, you can see the texture has been scraped off. Next it needed to be re-textured (a light orange peel) and painted.

After: In the picture on the right, you can see the finished product (and a new light fixture). The ceiling is so smooth now, and instead of sucking light out of the space, it spreads the light nicely. :-)

We had read about popcorn removal online and decided that this was a project we wanted to hire out. Basically you need to get the texture wet, scrape it off, re-texture the ceiling, and paint it. Matt and I are big “do it yourselfers”, but this project was going to be really messy and time consuming. So we hired it out, and I’m SO glad we did. In the end, our house now feels cleaner and lighter, and we are so happy with our “new” ceilings. It is the best thing we’ve done for the house so far.

For anyone considering removing popcorn ceilings, here are some of our thoughts on the project:

In the end though, we are so happy with our ceilings now. They look great and they make the whole house feel so much better. We are so, so glad that we had the ceilings worked on and that we did the work before we moved in!

One thought on “Thoughts on Our Popcorn Ceiling Removal”